After dark, the forests near Daraina in northern Madagascar are one of the best places to look for aye-ayes. One of the most critically endangered species, the aye-aye is also arguably the world’s most peculiar primate and epitomises all that it bizarre and ‘other-worldly’ on the island.

It is the world’s largest exclusively nocturnal primate and 50 years ago was thought to be on the brink of extinction. It is now known to be reasonably widespread in remaining highly fragmented rain forests and dry forests, but always occurs at very low densities and is extremely difficult to find.

An amazing aye-aye peers down from the canopy near Daraina

Because of its rather devilish, gremlin-like looks there are many folklores associated with aye-ayes, most of them negative. In many areas they are seen as harbingers of doom and are killed on sight. In Daraina most people take a different view and some local guides are adept at finding these remarkable creatures and showing them to excited tourists. 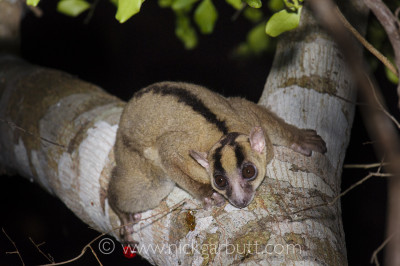 The vocal fork-marked lemur provides a distinctive chorus after dusk in the forests near Daraina.

As you might guess, there are considerable challenges when photographing a black, canopy dwelling animal that never stops moving at night! I was able to anticipate which branch this aye-aye was going to move onto and position my self accordingly. Trying to illuminate it with a hand-held torch in order to focus was an added difficulty. For simplicity, I used a single flash, but in the future I hope to try something more elaborate and find a way to position a flash behind the animal to achieve back lighting that would show the animal’s amazing shaggy fur to best effect.

These forests are remarkable for several reasons and are particularly rewarding for seeing several other nocturnal lemur species, one of which is the fork-marked lemur (Phaner furcifer). This is a species that has a disjunct distribution and is very challenging to see in most other locations, but in Daraina it is common and just after dark the forests resonate with its distinctive calls.